This white brick house close to the Red River and north east of the St. Norbert Nursing home was built in 1912-3 for the Henri de Moissac family. It replaced the log house the family had occupied since 1901. 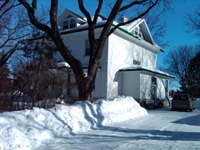 The three-storey home has interesting features including the windows on all sides on the third floor allowing a vista of the river, the bedrooms are a good size, and a safe is in place in the basement for the secretary-treasurer’s safekeeping responsibilities. Some early meetings were in his house, as the Municipal Hall was not ready to accommodate the newly-formed council.

Residents after the de Moissac family were ones by the name of King and that of Auguste Thorimbert, the Provincial Fire Commissioner in the 1960s.

A park at the corner of rue La Barrière, avenues du Couvent and St-Gabriel, remembers the de Moissac family.

The present resident is Father Albert Lalonde (269-6554) who is informed about the plaque program.