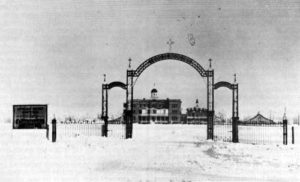 The orphanage and front gate in the 1930s

Les Soeurs de Misericorde (Sisters of Mercy), who arrived in Winnipeg in 1898, built a small hospital and a home for single mothers and infants. This hospital later became the Misericordia Hospital. In 1904, with assistance from Father Noël-Joseph Ritchot, the sisters founded an orphanage in St. Norbert and called it Asile Ritchot. The orphanage was to house the large number of babies that were being born at the hospital that were born to single mothers or to families that could not afford to raise a child. Some of the unmarried mothers lived and worked at the orphanage as well. 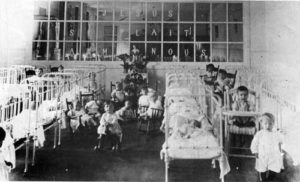 A room in the orphanage

The original orphanage was a brick house, owned by Joseph LeMay, a businessman and MLA from Quebec who died in 1893 (Manitoba Historical Society – Cityscapes Asile Ritchot). After the death of LeMay, the house and property was acquired by Father Ritchot who then gave it to the Sisters of Mercy. The original house had to go through many renovations to turn it into an orphanage and it eventually included kitchens, a chapel, a refectory, a cemetery, a large nursery and the sisters’ living quarters. Overcrowding and disease was a major problem in the small orphanage and babies spent much of their time in their cribs. A Manitoba Board of Health report stated that at one time, “The graduate nurse in charge of the older children has been moved up to the baby’s ward where she has sole charge of 64 babies under two years of age, many of whom are sick.” (Winnipeg Free Press – Manitoba’s First Feminists).

Despite plenty of hard work, the sisters struggled with lack of funding and insufficient facilities. The sisters relied on donations for revenue as well as produce they created on their own small farm. The mothers that lived there paid a small per diem that they could pay off by working for the orphanage or the hospital. 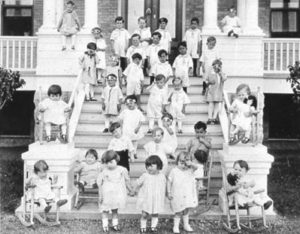 Children on the stairs of the orphanage

In 1911, thanks to funding from the church and the provincial government, the larger building with the red domed ceiling was built. This new building included large nurseries and dormitories, play areas, balconies, and food preparation areas. In 1945, when the government took over the care of orphans, children were transferred to Rosalie Home or sent to foster homes if necessary. In 1948, the orphanage was closed after caring for over two thousand children and eight hundred mothers. In 1954, the cemetery remains were relocated and the building reopened as a seminary for the Oblate Fathers. The Oblate Fathers left their seminary in 1970 and the building was taken over by X-Kalay, now called the Behavioural Health Foundation.