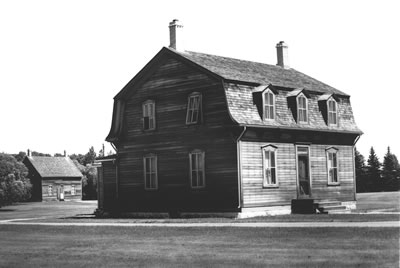 The Bohemier House had been built in 1890 and lived in continuously by members of the Bohemier family. In 1973, a second heritage home in St. Norbert was scheduled to be demolished to make way for an apartment block. The house was examined by the Historic Resources Branch, who recommended that every effort be made to acquire the house and restore it. The Fort Garry Historical Society was given the house by Imperial Developments Limited and arrangements were made with the Fort Garry Community Council to move the house to a temporary site next to the Fire House on Dalhousie Drive. The house was moved to the Moody Property in late 1976 and was later moved to the St. Norbert Provincial Heritage Park.