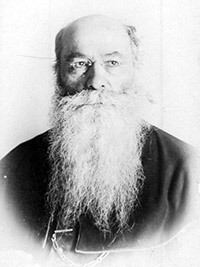 Father Noël-Joseph Ritchot was ordained as a Roman Catholic priest at Collège de L’Assomption on the 22nd of December, 1855. In 1861, Ritchot volunteered to serve under Bishop Alexandre-Antonin Taché of the diocese of St Boniface and in early June, 1862, he was sent to the Red River Settlement in Manitoba. Upon arriving in Manitoba, Father Ritchot was sent to the parish of St. Norbert which he served for forty-three years (Dictionary of Canadian Biography Online – Ritchot).

Ritchot is known for helping his parishioners, most notably, Louis Riel. During the Red River Resistance in 1869, the Métis in and around St. Norbert were concerned about land claims being made around the area and the transfer of land from the Hudson’s Bay Company to Canada. A core group of Métis, led by Louis Riel, met at the parish of Father Ritchot to discuss plans for the resistance. Ritchot acted as an adviser to Riel and a chaplain to the resistance (Collections Canada People: Ritchot). 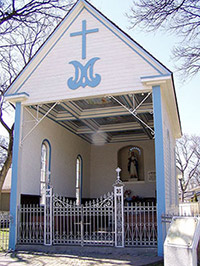 In 1870, Father Ritchot along with Judge John Black and Alfred H. Scott were chosen by Riel’s provisional government to negotiate with the Canadian Government. Before the group of delegates arrived, news of the death of Thomas Scott had reached Ottawa. Thomas Scott was an Irish-Canadian labourer in Winnipeg who was an ally of John Christian Schultz. Schultz was the leader of the Canadian Party and supported the acquiring of the Red River Settlement for Canada and was once imprisoned by Riel and his provisional government (Manitobia.ca – Negotiating the Manitoba Act). Schultz was in Ontario when Ritchot arrived and was working to turn the public opinion against Riel. Thomas Scott’s brother had Ritchot and Alfred Scott arrested for the murder of Thomas Scott but were released shortly after.

Despite the hostility between Ontario and Quebec at the time, Sir John A. Macdonald negotiated with Ritchot and his companions and eventually passed the Manitoba Act. The diary of Ritchot during this time can be found here (page 131-160). The Manitoba Act officially made Manitoba into a province that contained the Red River Settlement and surrounding area. The Manitoba Act was based on a list of rights Riel had drafted and included rights to denominational schools, laws in both French and English and the use of both languages in court. The Manitoba Act also promised to provide the Métis with the title to land they had already farmed as well as 1.4 million acres of farmland for use by their children.

Ritchot continued to live and work at his parish in St. Norbert and during his time in St. Norbert, he was vital to the community. He helped to build a church, a convent, a rectory, a chapel and an orphanage. He also purchased 1000 acres on which the Trappists built a model farm and monastery. He was an important resource for the Grey Nuns for whom he helped upgrade their convent and lived with for the last few months of his life. Ritchot died on the 16th of March, 1905.