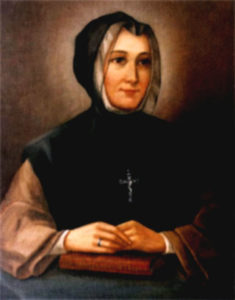 The grey nuns were started by Marie-Marguerite d’Youville, a young widow, who founded the Sisters of Charity of Montreal. Mother d’Youville opened a house for the poor in Montreal and later took over the administration of the Hopital Général of Montréal. The general population of Montreal resented the change of management of the hospital and mocked the sisters by calling them “les soeurs grises”. This name meant “grey women” but could also mean “drunk women” in reference to Mother d’Youville’s late husband who was an alleged bootlegger. The group chose to embrace the name “The Grey Nuns” to recognize their humble beginnings (Grey Nuns – The Canadian Encyclopedia).

In 1819, Bishop Provencher of St. Boniface requested some religious to come to the Red River Settlement in Manitoba to assist in missionary work there. Seventeen of the Grey Nuns volunteered for the job and headed to Manitoba by canoe in a trip that took fifty eight days (Grey Nuns and the Red River Settlement – Manitoba Historical Society). Upon arrival in St. Boniface, the Grey nuns erected a small convent and school in St. Boniface (now the St. Boniface Museum) and established the first St. Boniface Hospital in 1871. In December, 1844, Sister Eulalie Lagrave of the Grey Nuns started to travel to St. Norbert twice a week to teach catechism classes. In 1858, St. Norbert became the site of a permanent Grey Nun Mission, a log convent used as a school. Sixty Métis children of the district enrolled immediately after construction . 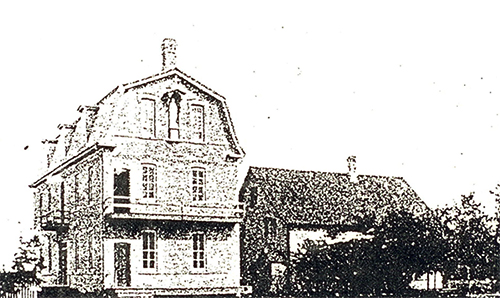 With the assistance of a parish priest, Father Joseph-Noel Ritchot, Grey Nun’s Convent grew and changed between 1874 and 1889 to meet the educational needs of the community of St. Norbert. The Grey Nuns were able to build a bigger, more modern convent in St. Norbert in 1904, building around and using parts of the old convent. The new convent contained laboratories and textbooks and was able to meet Department of Education standards and offer certified high school diplomas. The convent became an all girls school for grades one to twelve. Many of the students boarded at the school with the sisters, including at one time Father Ritchot who stayed at the convent from January 1905 until his death in March 1905. The curriculum of the school was described by Father Ritchot,

“The program of studies is exactly the same (as in Lower Canada): French, English, history, mathematics, drawing and music, etc., with the exception that here they also teach spinning, weaving and knitting, besides sewing in old and new materials and other little industries that are favourable to good housekeeping.” 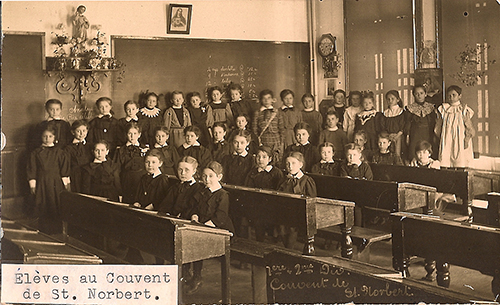 As well as vigorous studies, the students engaged in religious festivals, picnics and art and theatrical events. The sisters also maintained a farm to raise food for the convent and school tuition was often paid in produce. The neighbouring Trappist fathers could also use their farms to support the convent and students if needed.

In 1938, an old wing of the convent was demolished and a modern one constructed. In 1957, the entire building was renovated, the fourth floor removed, and the building altered. In 1958, the school celebrated its hundredth anniversary with 5,700 students having been educated there over one hundred years under the dedicated care of the Grey Nuns. 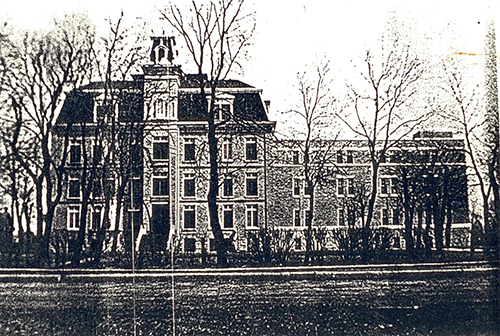 In 1959, the Seine River School Division opened a high school in St. Norbert as well as the primary school École Noël-Ritchot. The St. Norbert Convent closed within a couple of years and was sold. The building is now currently used as the St. Norbert Personal Care Home at 50 Saint Pierre Street.