This monument consisting of a cross and plaques commemorates the Métis resistance in 1869 to the entry of troops from Eastern Canada who were expected to arrive via Pembina Highway. Word was sent to the troops that they would meet resistance if they were to come as far as St. Norbert. The Métis and others wanted a negotiated takeover, not a forced takeover. A physical barrier was erected and the Métis were ready to stop any intrusion. 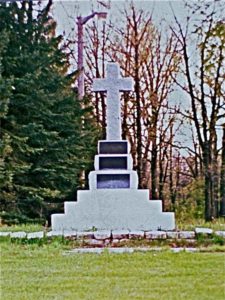 In fact, the troops stayed at Pembina, so no violence took place. St. Norbert became the headquarters for Louis Riel with the assistance of Father Noël-Joseph Ritchot during the “time of troubles”. Father Ritchot was one of three Manitobans who went to Ottawa to negotiate the Manitoba Act that contained the provisions sought by the Métis and others.
The monument had been located in a place outside the town though possibly nearer the actual site of the barriere. It was in a place difficult to access. It is now easily available to those interested in its story at Place Saint-Norbert.