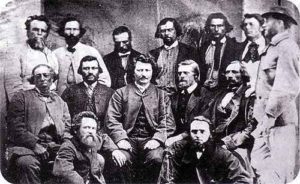 Riel and members of his provisional government.

On the 19th of October, 1869, a meeting was held at the St. Norbert parish that elected the Comité national des Métis with Louis Riel as the secretary. On October 20th, 1869, the Métis learned that Govenor McDougall from Canada was heading to them with arms and men. The Métis were already nervous about their land as they had had confrontations with surveyors in the past and were concerned about the upcoming land transfer. The Hudson’s Bay Company that owned and governed the Métis land was set to transfer it to the Canadian government and the Métis of the area were not well informed of the terms of the transfer and how it would affect them (Manitoba Culture, Heritage and Citizenship – St. Norbert).

On October 21st, 1869, Riel and a group of Comité members met in St. Norbert to discuss a plan to stop McDougall from entering the territory. A group of Métis militia built a three-foot-tall wood barrier blocking the Pembina Trail crossing. In the afternoon of the 21st, in addition to the barrier, about forty armed men were patrolling the area.

“…on a cold raw morning in the last days of October, 1869, I was approaching the River Salle (sic), some nine or ten miles south of Fort Garry…when word came from a house on the wayside that we should be stopped before crossing the river. When within a few hundred yards of the bridge an obstruction, something like a pole fence, appeared across the whole width of the road, which on either side was here bounded by poplar woods.

A few men with guns in their hands were standing on the other side of the barricade. One of their number was dispatched to a tannery which stood in a hollow close by the bridge, and in a few minutes returned with someone having authority. After a few questions some poplar poles were thrown aside from the slight construction in front of us, and we were allowed to pass through… we were told that the rather simple looking obstruction across the road was intended to keep out Governor McDougall and his whole retinue and, strange as it may seem, it effected this purpose.” (Métis Museum – La barriere)

The barrier was successful and prevented the government officials from occupying the territory and proving that the Métis would resist being taken over. This was the start of the Red River Resistance which ended in the creation of the Manitoba Act that officially declared Manitoba a province.

In 1906 a stone cross was erected by L’Union Nationale Métisse de St. Joseph near the La Salle river in honour of this event. The text of the monument reads,

“Here Nov. 1st, 1869 the Métis “barred” the road to the envoys of the Canadian government on their way to Fort Garry to establish a new government. The intervention of the Métis forced the authorities to undertake negotiations which brought about the creation of Manitoba and enshrined the rights of the population of Red River.”