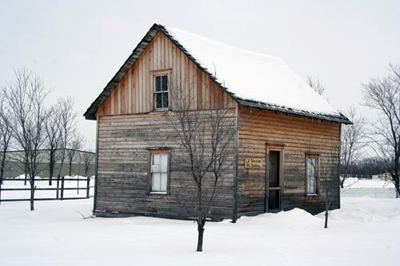 The McDougall family was among many Metis who relocated from the St. Boniface-St. Vital area to Lorette and other areas in Tache during the troubled years of 1868-70. Daniel McDougall, 27, found property to his liking south of the Sein River in 1869, staked his claim , and began ploughing his field. By 1871, McDougall and his family had built a 20′ x 25′ log house and had taken up permanent residency. McDougall died on May 28, 1880, shortly after a train accident in St. Boniface in which he lost a leg. He left his wife and two sons with a lot, two buildings and some cultivated land. Three years after her husbands death, Mrs. Mcdougall and her teenage sons moved across the river and built a sturdy log house (12′ x 21′). This house now stands at Place St. Norbert next to the St. Norbert Farmers Market.

The McDougall House is a 1 1/2 storey lot building with dovetail corners, considered by many to be the ultimate in log building construction. Because of the great care needed in making these corners, usually only an “expert axeman” would choose the style. The fact that the joints still fit snugly on this 105-year-old house shows the remarkable workmanship involved.