The original Red River Floodway was built between 1962 and 1968 and cost $63 million. At the time, excavation of the floodway channel was the second largest earth moving project in the world (second only to the Panama Canal and larger than the Suez Canal project). Since 1968, it has prevented more than $40 billion (in 2011 dollars) in flood damage to Winnipeg.

The floodway gates were put into operation in 1967, a year late for the 1966 flood. The gates can be viewed by approaching from Turnbull Drive on the west side of the Red River or Saint Mary’s Road on the east side. What you see from ground level is what looks like a fairly ordinary bridge. A control and lookout structure exist on the south side of the bridge. From inside it is a different story. Buried some sixty feet below the surface are the gates and mechanisms that make them work. To reduce the flow of water through the city and redirect it into the floodway channel the gates are raised from below. 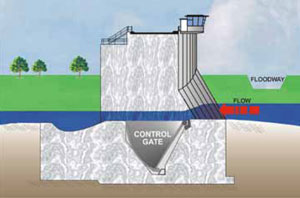 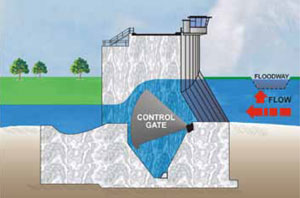 The following photos were taken by Peter Loewen in 2012 when one of the two sets of gates had been drained of water so that repairs could be made. You can see the curved gate on the right of the pictures. Raising the gates is assisted by the force of the water on other parts of the structure. At the point where the photos were taken he was some fifty feet below normal water levels.