The front of the monastery before the fire.

Father Ritchot had long hoped to establish a monastery on a secluded piece of parish land along the La Salle River. In 1891, Ritchot’s hopes were realized. He and Archbishop Taché of St. Boniface persuaded the Abbot of Bellefontaine, France, to establish a home for Trappist monks in St. Norbert. The Trappists were an independent branch of the Cistercian Order which began in Normandy after 1664. They strictly followed the basic tenets of St. Benedict: charity, obedience and humility. Religious persecution in France during the late nineteenth century forced many Trappists to leave Europe.

In 1892, the monks arrived at Nôtre-Dame des Prairies (Our Lady of the Prairies). For eighty-six years, the site provided the Trappists with tranquility and sustenance for their lives of prayer and manual labour. Without the comforts and distractions of the secular world, the monks were devoted to work and prayer, and sought a closer union with God through contemplation. They rose at 3:15 a.m., gathered for prayer seven times during the day, devoted several hours to spiritual reading and study, and worked laboriously at field, garden and craft duties for the rest of the time. For many years, the Trappists observed their Order’s renowned rule of silence within the monastery, communicating in their own form of sign language. 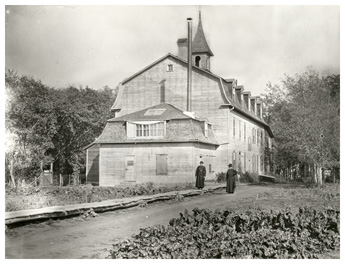 The first monastery building, constructed shortly after the monks arrived in 1892, was a three-storey wooden structure on a stone foundation which featured a chapel, porch and bell tower. It was adapted as a house for guests in 1904 when the monks moved to a larger residence built nearby.
The Trappists made many efforts over the years to preserve their peaceful solitude. However, by the 1960s, encroaching urbanization increased traffic in and through St. Norbert. In 1975, the Trappists decided to relocate to a more secluded location near Holland, Manitoba, 145 kilometres (80 miles) southwest of Winnipeg. By 1978, most of the outbuildings had been taken down or moved. Only the chapel and monastic wing, guest house and gate house remained.

Local residents acting through the non-profit organization Heritage Saint-Norbert, set out to preserve the site’s historical and cultural character. In 1980, the group secured from the City of Winnipeg a historic building designation for the chapel and monastic wing. The group began to research possible uses for the site. Tragedy struck in 1983. Vandals lit a fire which gutted the vacant chapel and monastery. Fortunately, the Guest House, located some distance away, was spared. 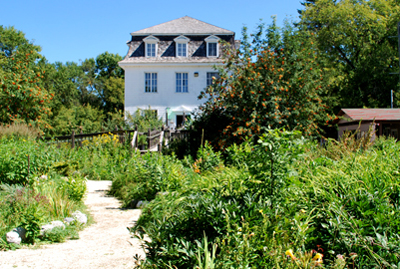 The guesthouse that became the Saint Norbert Arts Centre.

In 1987, through the cooperation of Genstar and three levels of government, the property was set aside as a provincial heritage park. In 1988, as a result of the efforts of Heritage St. Norbert, the Province of Manitoba designated the guest house and the surrounding land as a heritage site. That same year, the guest house and adjacent five acres were purchased from Genstar with a donation from St. Norbert residents William and Shirley Loewen. Thanks to provincial grants, donations and countless volunteer hours, the Guest House was partially renovated and remains as the St. Norbert Arts Centre.