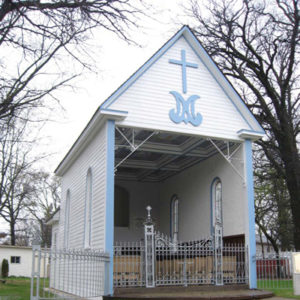 Father Joseph-Noël Ritchot promised the Metis that he would build a chapel if there was no bloodshed between the Metis and Governor McDougall during the Red River Resistance. Governor McDougall had come to the settlement to see about claiming the land for Canada but was met with resistance from Riel and his men as well as a wooden barrier (la barriere). When McDougall’s men were escorted out of the settlement by armed men, McDougall gave up and returned to Ottawa.

Ritchot and his parishioners built the chapel (La Chapelle de Notre-Dame-du-Bons-Secours) in 1875, to commemorate the success of this dispute which was eventually settled through negotiation and resulted in the inclusion of Métis land, language, and school rights in The Manitoba Act of 1870.

The open-air chapel, a type of amenity now rarely found in Manitoba, is an expression of Ritchot’s gratitude to the Blessed Virgin Mary for her protection during those troubled times. The Chapelle de Notre-Dame-du-Bons-Secours has remained a historical and spiritual landmark since its construction a few metres east of its current location.

The paintings on the ceiling of the chapel were added in around 1885 by the French painter Constantin Tauffenbach. Tauffenbach was from the German Romantic school of painters and moved to Manitoba in 1882. He was known for his spontaneous but confident style.

The paintings represent different episodes in Mary’s life. One is of the holy family, one is of the angel telling Mary she would bear Jesus and one is of the three virtues: Faith, Hope and Charity. There are also paintings depicting the twelve apostles, each holding a symbol of their identity.

In 1994, a Ste. Genevieve painter, Robert Freynet reproduced the original Tauffenbach paintings and the reproductions were mounted on the ceiling of the current chapel on May 31, 1994.