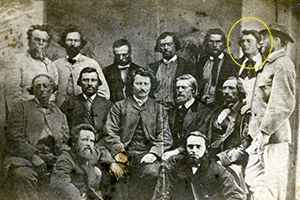 Jean-Baptiste Tourond was born in St. Boniface in 1838. He married a Métis woman, Angelique Delorme, daughter of Joseph Delorme. They lived and farmed in St. Norbert on lot 42 and had 10 children, two of whom died before their first birthday.

On August 20, 1869, a survey party headed by Colonel John Stoughton Dennis arrived in Fort Garry to survey the land prior to the transfer of the land from the Hudson Bay Company to Canada. Both the land transfer and the surveying made the Métis of the area nervous. The Métis did not hold clear titles to their lands and had a different way of sectioning land than the English. The Métis had a system that sectioned the land into long narrow strips that each connected to the river whereas the English created square sections. While the Métis were concerned about their land, they were even more worried that they would lose their language and religion. Tourand was one of the original members of La Comité National des Métis de la Rivière Rouge. The Comité was formed with Louis Riel as secretary to represent the interests of the Métis during these difficult times.

On the 11th of October, 1869, Baptiste Tourond was among those who stopped the survey crew in St. Vital. Tourand also represented the St. Norbert Parish at the “Convention of 24” at which both French and English settlers got together to discuss the future of the settlement and to come up with a list of rights to use when negotiating with Canada.

After Manitoba was declared a province and the Manitoba Act was passed, Tourond was part of a group sent by Ritchot to establish a new parish along the Rivière aux Rats. By establishing a parish, surveying and settlement on the land could be stalled. Tourand was an intelligent and exceptional farmer and ensured the settlement was a success.

Tourond was so well known for his farming skills that he helped form the Societé Agricole du Comté de Provencher and was appointed to the board of directors of the Provincial Agricultural Association. In 1871, he was named Commissionaire d’École for St. Norbert and oversaw the creation of a new school. He also served as a justice of the peace for Provencher and was appointed a deputy sheriff in 1876.

In the mid 1870s, the Canadian government failed to recognize the two-mile hay privilege the original settlers owned before Manitoba became a province. Tourond helped to organize a petition and come to a resolution and declined a seat on the grand jury, Court of Queen’s Bench. As secretary to an assembly in St. Norbert, Tourond recorded protests and forwarded them to the Minister of the Interior.

Jean-Baptiste Tourond was a literate and respected farmer, delegate and director and a valuable member of the community.