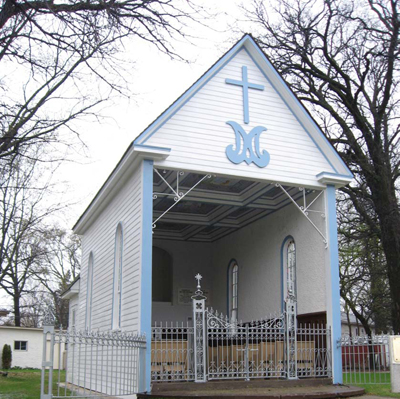 Ritchot and his parishioners built the chapel (La Chapelle de Notre-Dame-du-Bons-Secours) in 1875, to commemorate the success of the Métis resistance of 1869-70. That dispute, eventually settled through negotiation, resulted in the inclusion of Métis land, language, and school rights in The Manitoba Act of 1870, the basis of the Red River Settlement’s entry into Confederation.

The open-air chapel, a type of amenity now rarely found in Manitoba, is an expression of Ritchot’s gratitude to the Blessed Virgin Mary for her protection during those troubled times. The Chapelle de Notre-Dame-du-Bons-Secours has remained a historical and spiritual landmark since its construction a few metres east of its current location. In 1989, the chapel was declared a Manitoba provincial heritage site. Read more…